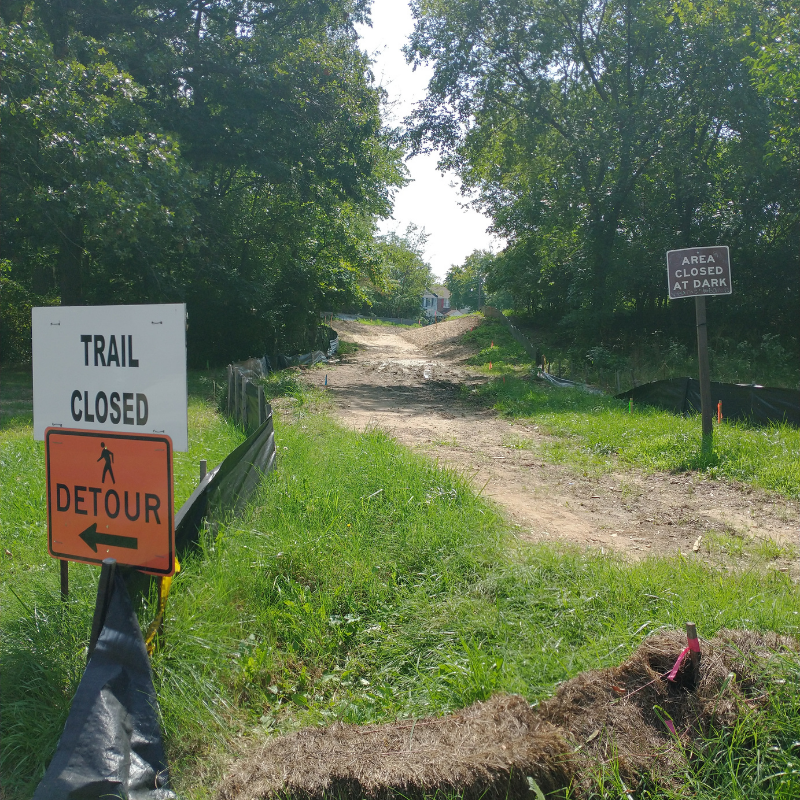 Originally printed in the online newsletter Next Stop…Riggs Park on September 9, 2021.

Just when we thought things were finally back on track for construction of the North Michigan Park-Fort Totten pedestrian path between Galloway and Gallatin streets NE, ANC 5A sends word that the National Park Service (NPS) is halting construction again. And this time more indefinitely it appears. See the communication from ANC 5A below:

During preparations to resume construction, the NPS discovered an underground infrastructure that may prohibit the trail from being constructed as planned. The NPS is surveying the site and considering other options for the trail that could include redesigning the trail or changing its route.

The site will remain closed for public safety as we explore these options.

Please reach out to me at kym_elder@nps.gov if you should have any questions.

Color me confused. NPS does not indicate exactly what this “underground infrastructure” is.

This also makes me wonder if a path/sidewalk will ever get constructed on the south side of Galloway between South Dakota and 4th Street NE. That path should have been designed a long time ago. I was told by someone in the District Department of Transportation (DDOT) that after funding was finally budgeted for design, NPS designed a path that was six feet when it should have been 10 feet. Earlier this year in April, NPS wrote to me that “DDOT just transferred the funding to Federal Highway Administration to complete the design of the sidewalk from South Dakota Avenue NE to the existing DDOT/WMATA sidewalk along Galloway Street NE. We do not have a timeline at this point when the design will be completed.” So design of that path appears to be sitting in a black hole somewhere between NPS and DDOT. I remain confused about why all of this seems so hard.

In any case, it is not clear what the timeline is for next steps on the Gallatin-Galloway path or how and when NPS intends to rehabilitate the area where extensive soil has already been removed for construction. But hopefully the unfinished path will not just become an even bigger mud pit than it already was before this project got started.

You can find out more about which cookies we are using or switch them off in settings.

This website uses cookies so that we can provide you with the best user experience possible. Cookie information is stored in your browser and performs functions such as recognizing you when you return to our website and helping our team to understand which sections of the website you find most interesting and useful.

Strictly Necessary Cookie should be enabled at all times so that we can save your preferences for cookie settings.

If you disable this cookie, we will not be able to save your preferences. This means that every time you visit this website you will need to enable or disable cookies again.